Something I notice in a lot of student work is what I tend to think is a misunderstanding of the principle of exaggeration. I feel that many think the idea of exaggeration is just making every movement bigger and over the top, especially when trying to do a cartoony style. I think a different way of looking at the idea of exaggeration is not necessarily making things bigger, but to exaggerate the contrast between elements. Quick timing vs slow timing. Big movements vs smaller movements. Light vs dark. Pinky vs Brain. Etc.

There’s a few problems with making quick+bigger movements across an entire animation.
Firstly It doesn’t let the audience breathe and take in what is happening, it affects the clarity of your storytelling. But also without the smaller/slower movements, the bigger/faster movements lose their impact. Emphasis and texture in the shot are lost.

I just came across this deleted scene from Cloudy WIth A Chance of Meatballs 2. The style of the show makes great use of exaggeration and think we can take some things from even just 3 shots in this sequence. 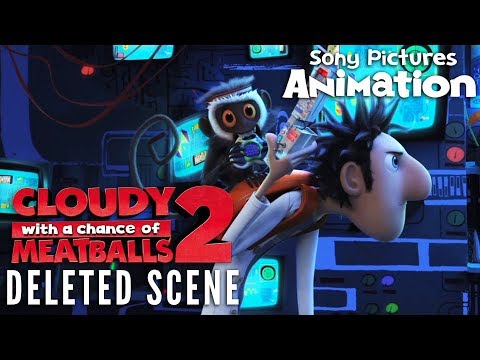 Firstly we see Flint racing down the street in a very exaggerated way, big crazy movements and very fast. He then swings around the parking meter and bursts in through the door. A key point though is that he spends longer at the parking meter than he needs to, about 18 frames. Just having that extra little bit of time to pause gives the audience to take in the scene, what’s happening and also an idea of what’s going to happen next. So while his run is exaggerated, his pause is also exaggerated.

We see Flint in a hold, a super quick move in 2 frames but then another hold before he makes the mark across the calendar. This isn’t all just one big/quick movement that leaves the audience behind, there’s a deliberate use of fast vs slow that gives the audience information they need and texture to the timing.

I love these jump cuts. Take note that his arms are flailing in big/quick movements. But watch his body, there’s hardly any movement. That stillness gives us just enough to read what’s happening in such a short cut. Our eye doesn’t have to jump round the screen following his body in each shot, but we still get the emergency of the scene through the exaggerated arms and poses.

Somehow my simple idea has become a 500 frame monster. Luckily I can make this my 1st and 2nd assignment for class 03.
I’m not entirely happy with the way blocking is going, especially when he jumps out in underwear. I don’t feel I’m quite capturing the right disappointed feel or have clear posing when he goes back into the box. Having the extra time really takes a load off though and can spend a bit more time trying to get this blocking feeling good.

Damn you knee pops! *shakes angry fist*
In the end I do wish I had gone for a personality walk, just so I’m stepping away from rote exercises. Fairly happy with how it turned out though.
The poses I’m not so pleased with, was a busy week at work so was a little short on time.

I’ve learnt a hell of a lot over the past 12 weeks, it’s really filled in a lot of tiny gaps in my understanding of animation and am looking forward to the jump in difficulty of Class 02.

Tim’s tips for anyone in/looking to do Class 01:
– Simple is best. I think class 01 is all about fundamentals, learn to nail them before trying to wow the world.
– Use your peers. Get a peer buddy, join Facebook groups, use your Public Review space and comment on other’s work. The community has really helped me in many ways.
– Use reference material for the pose sketches. The point is to learn how the body acts in the specific states/emotions. Just doing a few sketches off the top of your isn’t really push you to learn new knowledge.

The hardest thing about the personality walk was actually choosing one. I originally wanted something subtle and sassy, but decided to go for something more cartoony to contrast with last week’s vanilla walk.

I got a bit caught up focusing on Ballie’s knees that I ended up neglecting other parts of the movement. Revised animation is below.

Things learnt: Keep an eye on the bigger picture.

Decided to go a bit beyond a basic animation as I know the next couple weeks will be very technical animation. I found this week really pushed me because of this decision, the tail especially when the character stops was quite difficult to get right. In the end I’m fairly happy with it.

Things learnt: Update this blog sooner so I can remember what I learnt.

Task: Animate a pendulum moving from one position to another.

Pendulums are about 10 times harder than they look, easy to block in but difficult to refine. I won’t say how long I spent doing this simple animation : P But in the end glad I spent the time on it. Just a small note from Nate that my top link had a slight spacing problem. Revised animation + planning below.

Task: Animate a ball with the weight of a basketball going through an obstacle course and pose the character to convey devastation.

Just a few small notes from my mentor again. There was a 120 frame limit, so feel the ball stops a bit unnaturally to meet that.

Things learnt: Use a thesaurus.